The Kissing Sailor and the Dental Assistant 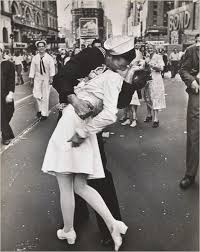 One of the most iconic images of World War II, the “Kissing Sailor” V-J Day photo, taken in New York’s Times Square by photojournalist Alfred Eisenstaedt, actually has a dentistry connection.  After decades of sleuthing to determine the identity of the kissing couple, it turns out that the “nurse” was actually a dental assistant!

The famous photo appeared in the August 1945 issue of Life magazine celebrating the war’s end.  But the names of the young woman and her kissing sailor remained a mystery for more than half a century.

It was not until recently, and with the help of modern science, that the identities of the two were finally confirmed.  Through an exhaustive forensic study published last year in the book, “The Kissing Sailor,” authors Lawrence Verria and George Galdorisi proved that the sailor was George Mendonsa, age 22 and a Rhode Island fisherman in civilian life, and the girl was Greta (Zimmer) Friedman, a 25 year-old dental technician.

For Greta Zimmer, the war’s end had special meaning.  She was a Jewish Austrian.  In 1939, Greta’s parents sent her and a sister to live in New York. Unfortunately, the parents had remained in Austria, and died in Auschwitz.

Safe in America, Greta volunteered as an air raid warden during the war, and attended a New York fashion design school.  In early 1945, she took a job as a dental assistant in Manhattan, and as was the custom, wore a uniform similar to that of a nurse.

On that famous day in 1945, Greta had taken a lunch-break walk from her employer’s office -- Dr. J. L. Berke -- to Times Square to read the scrolling ticker that confirmed the war’s end.  Neither Greta nor George ever knew they had been photographed, and neither saw the picture in LIfe.

In identifying George as the kissing sailor, it was the nose and hand size, a unique hairline, an arm tattoo on the right arm, and an unusual bend in the thumb that provided proof.  Analysis also showed that he was wearing a new uniform and had not yet sewn on his chevrons (ratings).  And, interestingly, researchers observed a small growth on his arm -- barely visible -- that irrefutably confirmed his identity.

Greta’s identification was actually very simple.  Experts evaluated her slender frame and petite height.  Compared to other girl contenders, she was the only one who could possibly have fit in the embrace of 6-foot 2-inch George.  And, clinching Greta’s identity was a small sliver of a colorful tapestry purse visible in one of Eisenstaedt’s photo frames.

If you are looking for a dentist in the Chicago area, please consider Wilmette Dental, a North Shore tradition in family dentistry for more than 30 years.  Feel free to call our office at 847-251-0085 or request an appointment online at www.wilmettedental.com.