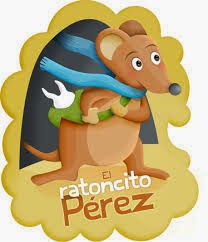 In America, as in many other parts of the world, when a child loses a tooth, the Tooth Fairy comes to collect it and leaves money in its place.  However, in Hispanic countries, there is a much different tradition.  There, a tooth is collected by a little mouse named Raton Perez who exchanges it for a gift.

It all started in 1894 when a Spanish priest told of a special mouse named Perez who lived in a box of cookies.  Perez would escape through the pipes of the city and into the bedrooms of children who had lost their teeth where he would exchange them for gifts.

Interestingly, while many Hispanic countries use a similar mouse, his methods vary. For example, children in Argentina don’t put their teeth under their pillow, but in a glass of water.  It seems that little Perez gets thirsty and the children are putting a drink out for him.

Whether or not you are currently a Wilmette Dental patient, we invite you to follow us on Facebook by going to http://www.facebook.com/wilmettedental and clicking “Like”.
Posted by phn344 at 2:03 PM No comments: